Many days lately, I have been ending by limping into the shower feeling like I’ve run ten miles or that I’m coming down with the flu. My legs ache and a tension headache brews behind my eyebrows. I am relieved to say that the cause is nothing unusual; I have a “three-nager” and she’s doing her job by testing me at mine.

Meltdowns over the smallest things have become the new norm. Frequently, she’ll ask for a bowl of cereal for breakfast. I’ll pour it, sure to include her beloved blue handled spoon. She comes to the table presumably to eat, but deems the offering unworthy by slinking under the table as if her bones have suddenly dissolved from her body. And there she lies…waiting.

I take a deep breath, while I am bracing myself to be calm and collected for the battle. And maybe this is my mistake; I’m giving her a head start because here is where she slams on the gas and begins yelling, “I DIDN’T SAY I WANTED CHEERIOS!” [Unintelligible wailing as her face becomes slick with angry tears and snot]. I sit there dumbfounded, wondering where I have been in the last thirty seconds. Surely, this isn’t a deserved reaction for making her breakfast!

Last week, I was on the verge of a nervous breakdown. My hands shook as I tried to pull her limbs into her bathing suit before swim class. She fought me as though I were forcing her off a cliff. Finally, I realized if I forced any harder, I could hurt her. I had to close her in her bedroom and called Scott to try to describe the depth of my frustration so that if for some reason CPS was called by the neighbors who could hear her screaming as though I was beating her (when in reality I hadn’t even touched her other than to take her clothes and set them aside), it will have been somehow documented that I tried–God, did I try–not to lose my ever-loving mind; that she was not even in the same room as me while she carried on at the top of her lungs.

When did someone flip the switch on my sweet girl? We were so happy, once upon a time! We would wake up, eat our toast and yogurt as the sun streamed through the windows. We’d do her lessons together then snuggle or run to the grocery store depending on the day, and I knew without a doubt, that my daughter loved me. Now I am not so sure.

So, of course I do the self-blame thing. “Maybe she watches too much T.V… Maybe we should have enrolled her in preschool this year…I am losing steam in my mid-thirties…I am inconsistent in my discipline…I expect too much…” On and on.

But today, I saw a glimpse of my sweet girl again. She was with me smiling from the minute her blonde head peeked into my bedroom at 6:45 a.m. until I turned off the light in hers at 8:15 p.m. Today was a much-needed, hope-giving gift. I am sure that all of this wretched behavior is just a phase and will pass sooner or later.

My favorite moment today happened when I was in the kitchen making dinner. Luke was afraid to go up to his room to get a book to read after school. There was a storm rumbling outside and he is always nervous by the booms of thunder. I was in a critical point of making gravy and couldn’t step away from the stove but I had an idea. “Grace!” I called, “Can you go upstairs with Luke to go get a book?” I was expecting her to say no, that she was too tired but instead I heard her tiny voice from the next room say, “Sure!” I didn’t react. I just waited.

As she bounced past Luke, she tossed her hair over her shoulder like, it was no big deal. “Luke, I’m really brave,” she said, “because Mom gave me a piece of her heart and I keep it in my heart and I know I don’t have to be afraid of anything.”

Everything got a little soft around the edges as my eyes filled with tears. My tiny warrior accompanied her big brother upstairs to get his book and reassured him the whole way that everything would be fine. 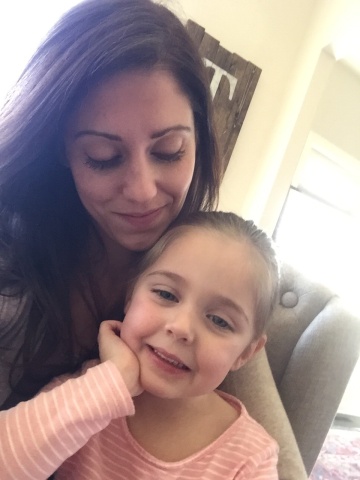 About a month ago. Grace was having some anxiety before bedtime. She’d hold my arm and beg me not to leave her room as I kissed her goodnight every night for about two weeks. So one night, I pretended to pull a piece of my heart from my chest and I pressed it to her heart and said, “There. Now you don’t have to be afraid. My heart is in your heart and you can always be brave because I’ll be with you.”

She seemed to like that and fell asleep shortly after. The nighttime drama also eased up from then on.

So, while the temper tantrums are at an all time high and I’m obviously not going to let her off the hook every time she pitches one, at least she believes she is brave. It has become my belief that if I can take that strong-willed nature and help her to channel it constructively, it will only serve her well later in life. Maybe the mood swings are her three-year-old way of warning the world to be prepared. In the words of Laurel Thatcher Ulrich , “Well-behaved women seldom make history.”